Full Circle is in some ways a fun CD but I can’t recommend you go out and buy it. It incorporates many weaknesses common to live albums. The songs, clocking in at five, six and even seven minutes, are overlong. There’s the requisite segment where each player is introduced by name and does a solo. There’s some jamming that was cool live but boring on CD.

Zoot was in his early 60s when this was recorded; his voice shows the miles, particularly on ballads. And this is not a blues CD, though there is a bit of blues, which uses Zoot’s voice to better effect.

Zoot – original name, George – is a talented guy. He was around at the beginning of British R&B, having formed the first version of the Big Roll Band in 1961. One of the original members was Andy Summers – later, of course, of The Police. Over the years, Zoot made a living acting, performing, writing songs. Now he’s formed a new version of the Big Roll Band – hence the album title, Full Circle. 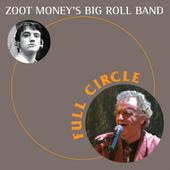 The songs are a grab bag of generic rock from various eras, some sounding like early Doug Sahm. Chestnuts like Robert Parker’s ‘Barefootin‘’ and Rufus Thomas’ ‘Walking The Dog’, are done as a medley. Makes you want to get up and dance.

Which brings me back to where I started. Zoot’s web site is http://zootmoney.org/. His gigs are listed. Go see him. You might buy the CD as a memento. He’ll probably sign it for you.