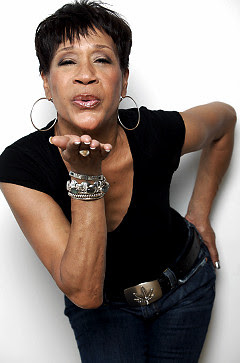 No one can put over a song like Bettye LaVette, the greatest unheralded soul singer in the world. And the incomparable Ms LaVette proved that again at the Jazz Café.

Slinky in black silk pantsuit, she strutted and danced, her songs a defiant assertion of who she is. “So proud I was built this way,” she sang in ‘The Battle Of Bettye LaVette’, a song about how, uncompromising as she was, she sang 40 years “before the money started rolling in.”

She sang of triumph and tragedy, but with not an ounce of self-pity. In ‘Choices’, she took the blame for all that’s gone wrong: “I’m living and dying by the choices I’ve made.”

The song had this reviewer near tears _ and apparently LaVette, as well.

She feels a song totally, emphasizing each word, her soulful voice cracking with emotion.

But this is soul, performed with a hard-driving band, and lots of dancing by LaVette. Man, can she get an 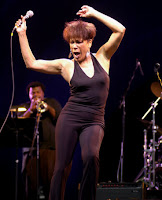 She makes eye contact with a listener, gestures, pleads, then writhes away across the stage. She is one of the few 62-year-olds who can get away with pelvic thrusts.

And her voice is one of the most expressive instruments in soul, conveying victory, despair and love. On “You’ll Never Change”, another defiant expression of self, she dropped the microphone and filled the room with her voice.

She makes no attempt to hide her age. Noting that she was finally nominated for a Grammy this year, she joked that she was older than the award itself. 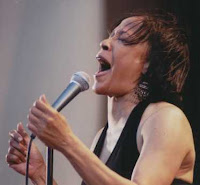 To say LaVette has lost nothing over the years would not be right. On the contrary, she has gained.

Her records, fabulous as they are, cannot convey the emotion she does in person. All her life experience is poured into each word. She can put over a song down to her silver-painted toenails.

Everyone should see a Bettye LaVette show at least once.