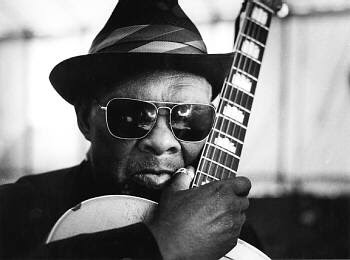 Reverend Gary Davis was pushing 70, a good 35 years past his heyday, when this live set was recorded in the UK. But his voice was still powerful, capable of roaring with relig 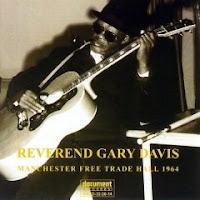 And his skills on “Miss Gibson”, his jumbo acoustic guitar, remained impressive – making for a show that delighted the audience then and holds pleasures for listeners today.

Davis, born in 1896, pursued music, one of few careers available to blind American blacks. He worked often on the streets, not recording until he was 58, and was one of the best ragtime guitarists of the early 1900s. His performance here of Scott Joplin’s ‘Maple Leaf Rag’ attests to that ability.

He was ordained in 1937, after which he often refused to play the Blues – though religion didn’t separate him from the bottle. This set is primarily gospel, performed with feeling, shouts and whoops. Davis had been rediscovered by the folk revival; the audience in Manchester was in heaven.

His guitar dexterity inspired many followers. He alternates rapid riffs with chords; he talks with the guitar; he plays with syncopation and humour on ‘Cincinnati Flow Rag’.

But on ‘Children of Zion’ the guitar is nearly overwhelmed by hiss. Even on better numbers, the recording can sound shrill instead of heartfelt. Still, this CD is one of the better places to hear Davis’ moving music.