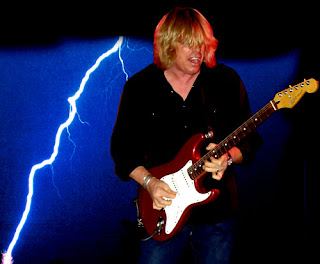 This album of live electric Blues would be great fun to blast into your backyard while you’re having a party, but if you haven’t heard these songs before, you haven’t been listening to the Blues.

Brad Wilson is a California act; he pretty much confines his touring to that state. He’s a good guitar player, in the show-off, amps-up style where you grimace constantly as you play. And he’s a competent singer, too – just not blessed with much imagination.

And that’s to say nothing of ‘Stormy Monday’, which has already appeared on more than 500 recordings. Obviously, Wilson is reluctant to play a live audience songs people haven’t heard before.

That said, this is not a bad album. All the players are decent. There’s some nice organ here, some fine horn w 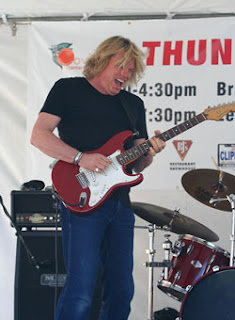 There’s not much variation in pace: Almost all these songs barnburners, though ‘Last Call’, one of the album’s highlights, does slow things down a bit to good effect.

Wilson, like any number of technically good players whose egos sometimes overcome their musicianship, is subject to sudden spasms where he plays way too fast just to show he can.

Still, it’s good, rollicking stuff, proficient players wailing on all instruments, quite tight. But people considering adding it to their collection should realize that it’s meant mostly as a concert souvenir.
Posted by M.D. Spenser at 07:07