Nobody’s Fault But Mine: Original Recordings 1927-30 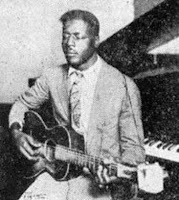 Johnson perfected bottleneck slide; the slide plays lead while his percussive strumming provides the rhythm. Johnson used, it is believed, a pocket knife for a slide, at least initially.

On all songs, he is accompanied only by his guitar and, occasionally, a background singer thought to be his wife.

The songs are pure Blues but with unremittingly religious lyrics. “His blood makes me whole,” he growls in ‘Church, I’m Fully Save Today’. 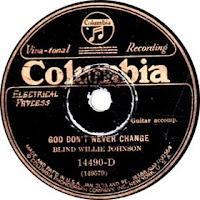 hear Johnson on the original versions of so many songs that have become classics: ‘Dark Was The Night (Cold Was The Ground)’, ‘Mother’s Children Have A Hard Time’ (usually rendered ‘Motherless Children …’), ‘It’s Nobody’s Fault But Mine’; ‘If I Had My Way I’d Burn The Building Down’ and others.

Little is known of Johnson’s life other than that his step-mother blinded him with lye when he was 7, and he died of pneumonia at 45 after a house fire left him homeless. But this CD, with excellent liner notes and a stellar collection of songs, offers a wealth of knowledge for those wanting to understand the origin of the Blues.
Posted by M.D. Spenser at 03:21