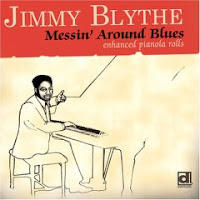 Jimmy Blythe was one of the originators of boogie-woogie piano. Hats off to Delmark for producing this amazing and valuable album of his work.

Little is known of Blythe’s life other than that he was born in Kentucky around 1901, moved to Chicago in his teens, and died of meningitis in 1931.

An esteemed sideman, he accompanied Louis Armstrong and Ma Rainey, among many others. He also had a solo career, part of which involved producing player piano rolls.

Early piano rolls were crafted by hand. But the more advanced method used for Blythe’s rolls involved a pianist actually playing on a special piano that reproduced the notes for the rolls.

Because a collector, Mike Montgomery, had some of Blythe’s rolls, Delmark was able to record Blythe’s playing on modern equipment. Through the miracle of antiquated technology, we hear Blythe’s playing as if it were recorded today, without the hiss of recordings laid down in the 1920s.

The result: a unique opportunity for a high-fidelity listen to original Jazz Age music.

And what fun. The 19 cuts are mostly ragtime or its relative, boogie-woogie, a genre that relies on a repeated walking bass pattern together with a lively right-hand lead characterized by syncopation and triplets.

Some tracks are credited to Blythe, some to other writers, and the origin of the rest is unknown. No matter. This is about as entertaining as piano gets. A fine recording.
Posted by M.D. Spenser at 02:56