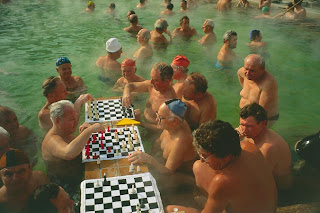 BUDAPEST, Hungary — A hint of snow chilled the air as half a dozen men clustered around a chessboard, frowning, wearing nothing but swimsuits.

Two of them were playing. The rest were watching. And all were up to their necks in the mineral-filled hot water that bubbles up from 4,000 feet below the city of Buda 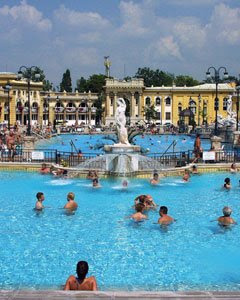 The water, thought to cure arthritis and known to cause relaxation, is a source of pride to Hungarians.

"It is our treasure," Eszter Szaniszlo, a guide at the Szechenyi spa, told me. "We don't have sea. We don't have mountains. We have thermal water."

The Szechenyi spa, on the Pest side of the city — the east side of the Danube — is one of the largest bath complexes in Europe. Around one of the many spots where the water emerges from the depths, the Hungarians early in the 20th century constructed a huge, ornate yellow building in the neo-baroque style — all balconies, balustrades, cupolas and statues.

The building — an oval surrounding the main outdoor baths — houses many amenities. You can rent a locker and a swimsuit, lift weights, do aerobics, enjoy a mud pack, take a sauna or get a bite to eat.

The center of the complex is open. It is here that you can bathe your aches away as snowflakes settle in your hair. Much of the clientele is local. The place is famous for chess players, who unfurl plastic chessboards and concentrate their minds while their bodies relax.

The waters are laden with sodium, calcium, magnesium and other minerals. Hungarians place such stock in the healing properties of the water that, if your doctor writes a prescription — so many soaks for this many minutes at such-and-such a temperature and mineral concentration — the government (which owns the Szechenyi spa) will pick up the tab. 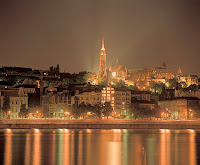 But plenty of tourists come as well, just for a good hot soak. Amid the mist that rises where hot water meets cold air, you'll hear many languages — Italian, French, German, Spanish and a smattering of English.

Not being one to neglect firsthand research, I rented a suit and strode, cold and goose pimply, out of the building and toward the pool, where the chess players were immersed in concentration.

There are three outdoor pools. At one end of the complex, a pool with an array of jets provides a more exciting experience. In the middle is a lap pool — the coolest of the three. Preferring to start right in on the stress relief, I headed to the third, the warmest, where the water is a comfortable 100.4 degrees Fahrenheit. 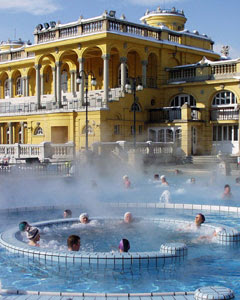 I waded in and let out an involuntary moan. The water was deeply relaxing. So was the rather cinematic experience of gazing up through the mist at the building's flourishes and scrollwork.

After a time, I waded to the foot of a nude Venus. From the base of the statue, jets of hot water arced through the air, pummeling my back and kneading my muscles.

It was daytime, midweek. Besides tourists, local retirees were in evidence. Around me paddled elderly Venuses — clad, thankfully — with figures more robust than the statue's. Beside them stood stoic men with bodies like Humpty Dumpty and faces like Leonid Brezhnev's. 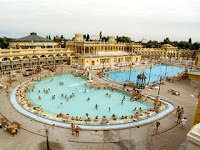 Fully relaxed, I decided to go for a little excitement. In the pool at the other end of the complex, a series of jets swept swimmers around in a circle. This was moderately entertaining, but not greatly so.

In another spot, jets shot up straight from the bottom of the pool. They were so powerful that you could actually bend your knees and sit on them. Around me, six or eight other people were doing the same thing, and virtually every one wore a foolish grin.
Indoors are the many therapeutic pools. Unlike the outdoor pools, which are constantly filtered and look quite clear, the indoor pools are filtered less often so the minerals can build up to the concentrations doctors prescribe.

Put another way, they're green.

I tried one nevertheless. I soaked for a bit, but my health, which was fine to start with, did not seem to improve, and I headed out for the more satisfying experience of bathing outdoors in the winter.

When it was time to go, my limbs were like spaghetti. I felt my skin aglow.

I was thirsty, though, and went to buy a drink before leaving. Szaniszlo, the guide, had told me about the spa's wonderful thermal water.

"It's good for the joints, for the bones, and you can drink it as well," she'd said.

I settled for a Diet Coke. 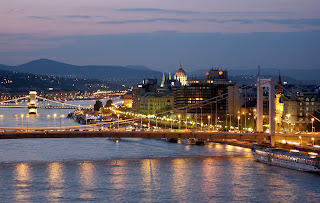