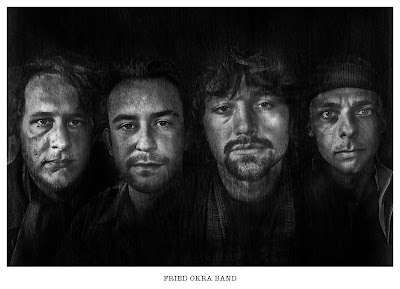 This Is Your Chance, France Baby!
Gateway

Think of this fine CD as Denmark does Mississippi – or, more specifically, as Fried Okra does Fat Possum. Four of the first five cuts are from artists featured on Fat Possum, a label that has single-handedly brought deserved attention to blues performers from the Mississippi hill country.

That rough, raw, rural and determinedly unpolished style is captured well by this quartet from Copenhagen. Don’t look for the standard blues progression. These songs have one chord – two, if you’re lucky. The thing here is the relentless rhythm and the unvarnished emotion.

“I been working seven days a week/Still can’t make ends meet,” Morten Lunn sings on R.L. Burnside’s “Poor Black Mattie” (misspelled on this CD cover as “Maddie”). The sound here is noisier and more electric that on the Fat Possum originals (Junior Kimbrough and Robert Belfour are also covered), but the slide stings, the drums clatter, the vocals are gruff, and the gritty feeling is exactly the same.

The tracks were recorded live, but have some overdubs. The result is the best of both worlds – the immediacy of live performance combined with the discipline of the studio.

Other songs by Corey Harris, Muddy Waters, Robert Johnson and Tom Waits fit right into the mix. “I was stirring my brandy with a nail,” Lunn growls on Waits’ “Get Behind The Mule” – and he sounds like the kind of guy who would do just that.

The album ends with a brilliant, slowed-down reading of Johnson’s “Crossroads.”

This album goes to show that Americans have no monopoly on the blues. You can create a genre but you can't own it. No spit, no shine, no polish – this is 100 percent real blues.
Posted by M.D. Spenser at 07:09