By M.D. Spenser
This debut by a supposed supergroup begins well, but the synthesizers and drum programming wear thin well before the album ends.

The best-known member of Temple Of Soul is Clarence Clemons, sax player in Bruce Springsteen’s E Street Band. Like Clemons, the other members have stellar contributing credits but no solo albums: Narada Michael Walden on drums, T.M. Stevens on bass and Vernon “Ice” Black on guitar.

The album’s opener, ‘Anna’, in which the singer overcomes his sexual inhibitions in a car, is tight soul-disco. You can almost see the disco ball throwing shards of light around the dance floor.

From there, we get a retro tour through various styles of black American music: the funk of Sly And The Family Stone, bits of hip hop, and ‘Shaft’-era Isaac Hayes.

The listener is treated to not one but two Barry White impersonations, which feature syrupy spoken-word intros pompously delivered in a deep voice: “You get sad, but know that I love you/The un 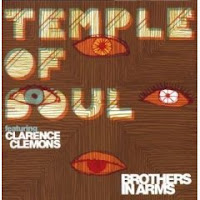 The only cover is Jimi Hendrix’s ‘Purple Haze’.

Mostly this is fine stuff by technically superb musicians. But halfway through the album, the throbbing synthesizer, echo-chamber vocals, and programmed drums start to become too much – especially for Blues loves, who tend to search for real emotion.

By the time the final track, the 13-minute ‘Jazzy Outtake’, arrives, the discipline with which the album began has given way to self-indulgence. And an album that began with such promise leaves in the end a disappointing taste.
Posted by M.D. Spenser at 00:43