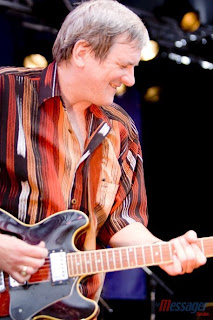 With these three enjoyable CDs, Blue Skunk demonstrates again the value of small, independent labels: This is good music we might otherwise never hear.

Judging from its Web site, Blue Skunk has only a half dozen or so artists, but they’re skilled and Bluesy. 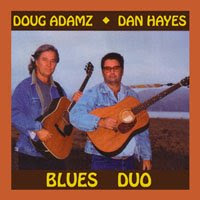 Doug Adamz and Dan Hayes, both fine guitarists, offer a stripped-down acoustic set: On some songs the spaces speak as loudly as the notes.

Their guitars blend so seamlessly it’s sometimes hard to tell whether two guitars are playing or just one. Their playing is easy, relaxed and rolling, sometimes augmented by harmonica—pure blues from two guys who are in it for life even if the money’s no good. “When you pawn your guitar it just breaks your heart,” they sing. 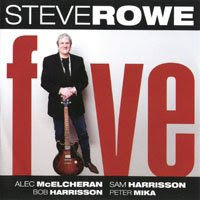 trast, is an electric guitarist, and he’s excellent. On “Five” he offers driving Blues-rock, heavy on the drums, with propulsive base lines.

Rowe really cuts loose on the guitar, but always to augment the song rather than to call attention to himself. Unpretentiously, he lays down some stonking blues. He rocks but remembers the roll.

The feeling ranges from swampy to Bluesy to funky. One song has echoes of Carlos Santana, another sounds like Gary Moore.

Bill Abel is an altogether different kettle of fish: On “One-Man Band” he provides the kind of raw and primal Blues the Fat Possum label brought to prominence.

The album was recorded live, no overdubs; Abel produces an unbelievably full sound for a one-man band.

He plays hi-hat and snare with one foot, bass drum with the other, and both rhythm and lead on guitars—some of which he made from cigar boxes.

His voice is a howl that seems to fit his bear-like appearance—at once a wail of desperation and an affirmation of life. 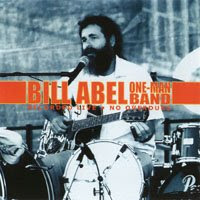 The songs are filled with noise, clatter and emotion. This music is very much in the style of Seasick Steve, but without Seasick’s pop veneer, if you can imagine that.

Good as they are, these albums could have been better. Abel’s CD is 16 tracks. Rowe’s is 15 tracks, most of them long. Paring down the number of tracks, painful as it might have been, would have resulted in tighter, more compelling albums.

Still, it’s a pleasure to listen to all three of these CDs. We can only hope Blue Skunk continues to bring such worthy artists to a wider audience.
Posted by M.D. Spenser at 01:21