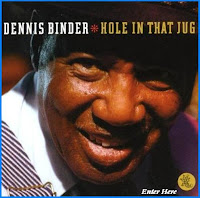 Hole In That Jug
Earwig Music Company
By M.D. Spenser

The basic structure of the 12-bar blues is so rigid that it imposes on the performer special demands of individuality. And this is where Dennis Binder fails.

You want to like the guy. His album’s got a snappy title. He wears an even snappier green jacket. He sounds like he’s having a good time.

But something’s missing – namely anything that would distinguish this from, oh, a thousand similar releases over the past 60 years.

This is standard 50s electric blues, pleasant as far as it goes, with Binder tinkling happily on the piano, and sidemen adding decent guitar and sax work.

Most of it was recorded in 2006, though two songs – tracks 7 and 9 – were laid down a mere 46 years earlier. No matter. It all sounds the same. All 13 songs written and arranged by Dennis Binder (and anyone else who ever recorded the blues).

ne for whom Binder ever opened a show or with whom he ever shared a studio. The names roll on and on: Freddie King, Lowell Fulson, T-Bone Walker, B.B. King, Al Green, ad infinitum.

He turned 79 in November; his web site reports he’s taking a break. If he resumes touring and comes to a venue near you, it might make a fun night out. But in a decent blues collection, this CD would just get lost.
Posted by M.D. Spenser at 23:18